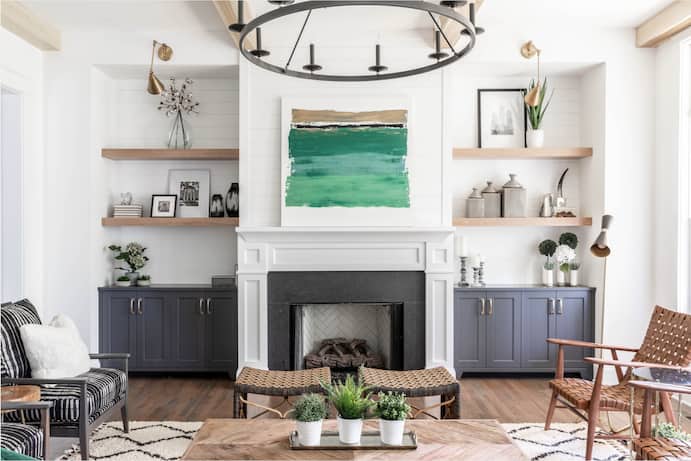 Matte black fixtures are popular in 2021. To keep your home from being dated down the line, bring in small doses of this trend and incorporate classic looks. This design by New South Home features a black chandelier and brass sconces, mixing the two finishes. (Laura Sumrak)
featuredhome & garden

Grass-green shag carpet evokes the Nixon era on the lower level of my family’s turn-of-the-century farmhouse. The wall-to-wall floor cover, like a teddy bear underfoot, was all the rage in 1974, when my grandparents left urban life to retire at the homestead.

Most trends — appliances in harvest gold and avocado, reflective brass fixtures, open floor plans and ultrahigh ceilings — date homes to a particular time in history. My grandmother’s green shag selection is no different.

Although no designer has a crystal ball, some styling choices are sure to date your home to 2021. Here, three experts offer alternatives to today’s fastest-fading trends.

White board-and-batten walls, industrial accents and neutral tones: The design world has exploded with the modern farmhouse look, mostly thanks to Joanna Gaines of “Fixer Upper” fame. “The most popular trends are the ones that date the soonest,” says Melissa Lee, principal designer and chief executive of New South Home, just outside of Charlotte. “They’re so overdone. It’s like a song that gets overplayed and, eventually, you’re tired of it.”

Instead: Incorporate one element. Dip your toe in. Rather than overhauling your entire living space with a trend, Lee says, “everything [trendy] should be in small doses. What isn’t going to be a major investment for you to change is the best approach.”

She recommends using elements of the modern farmhouse aesthetic, such board-and-batten or shiplap, on just one wall.

Piggybacking on the modern farmhouse trend is matte black plumbing, light fixtures and handrails. It’s “one of those finishes that’s going to date itself, for sure,” Lee says.

Instead: Mix in classic looks. “Use matte black mixed with polished nickel and satin brass, so you’re not tying every element to this trend,” Lee says. “If thoughtfully done, this can bring in small doses of the trend you like, but it’s less expensive to swap out.”

Terra cotta, burgundy, olive green and other dark tones can be risky, especially for a staple item, such as a sofa, says Kim Pheiffer, founder and chief executive of KP Designs & Associates in Columbus, Ohio. “Families [have come] to us before and said, ‘I have to go dark, because I have kids or grandkids,’ or, ‘because I have pets,’ ” she says.

Instead: Keep it neutral. For families like those, lighter-colored pieces don’t have to be off-limits. Furniture companies “have stepped up their game with performance fabrics, so they can be dry-cleaned, laundered or spot-cleaned,” Pheiffer says. “People can go back to that classic, neutral palette, which allows you to change up the look by changing pillows or putting a different color throw on it. If you bought a sofa with a truly bold color or pattern, you can’t hide that.”

Avoid opting for a trend that doesn’t serve your home’s architecture, Lee says, such as a modern farmhouse look in an urban loft or cold, industrial elements in a homey Cape Cod. Designers say that any style that clashes with a space’s authenticity can be problematic.

Instead: Preserve architectural integrity. “Always try to keep in mind the architectural style of the home,” Lee says. “If it’s a traditional home in the suburbs, and [a client] wants to go totally mid-century modern on the interior, it’s very difficult and definitely appears more trendy.”

She advises working with the original architectural details (exterior styling, cabinets and trim, columns) that are built in to the home and not easily changed.

That said, for clients with specific tastes, Lee has made exceptions. “I’ve had [an urban] client of eight years who has always wanted her house to look like the beach, which is a distinct difference,” she says. “Always be true to your personal style versus hopping on any trend.”

Thanks to the farmhouse boom, wooden features are a la mode. “Keep rustic or reclaimed wood at a minimum,” Lee says. “If a client brings up reclaimed wood, we’ll steer them into a [similar] concept, but not rustic. Just cleaner and more natural.”

“It’s a cool idea, but it’s just not great lighting,” says Margaret Handley, senior vice president of interior design with Dianne Davant & Associates in Banner Elk, N.C., and Stuart, Fla. “I wouldn’t use those bulbs in your kitchen, because it’s in your face, and while it looks really cool, you’re going to get tired of that glare. . . . I suggest using them in chandeliers, rather than fixtures that are more eye level, like kitchen pendants, sconces or vanity lighting.”

Instead: Install shaded fixtures. “If you really want an Edison bulb, you can find a fixture that has a shade on it that will protect you from the glare,” Handley says. “Or just find a different fixture that gives that same feeling.”

The interior barn door with exposed hardware is a product of the industrial and modern farmhouse trends. “Whether they’re rustic or painted or modern, everyone’s in love with barn doors right now,” Handley says. “It’s unique and can be done in a million different ways, but I think it’s going to look very static.”

Instead: Go with pocket or folding doors. Specifically for a closet, Handley says, opt for a traditional pocket door: “You can also do double doors that fold all the way back and do not take up too much room.” She adds: “Typically, pocket doors are not as soundproof and don’t provide as much privacy as a regular swing door, whether single or double. . . . Add interesting door hardware, large hinges or just interesting double doors instead of using a barn door.”

The best design decisions are the ones with staying power. “We want our clients to like their houses 10 years from now and still feel like the home reflects who they are,” Lee says. “Try to stick with classic styling of furniture and more classic colors, like neutrals. That’s the smartest way to keep things how you want it.”

This original story ran in The Washington Post on June 9, 2021.