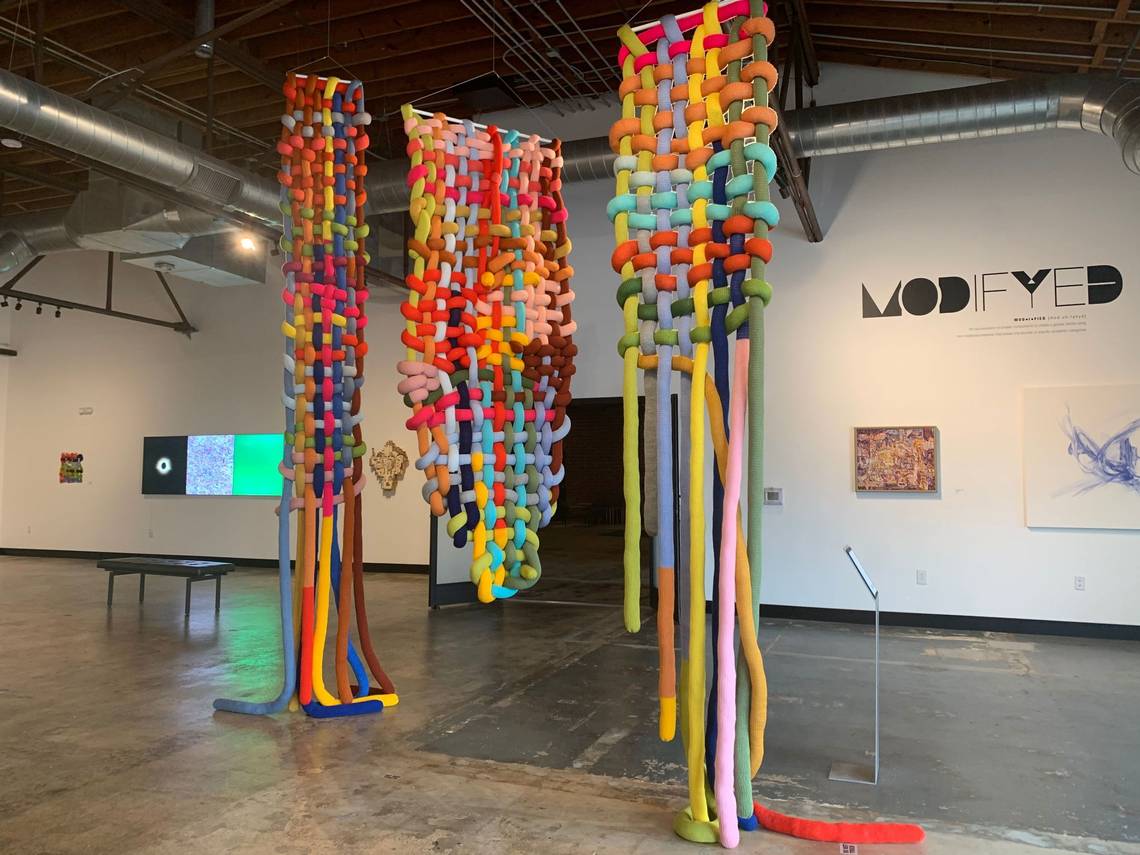 “All the light would just pour into these really big shelves that housed all the yarn — three, four shelves of yarn fabric,” she said. “As soon as I saw (it), I thought, This is my thing.”

Influenced by her Panamanian roots, color is key for the 25-year-old artist, whose large, looped and vibrantly colored woven installation is a feature of C3 Lab’s current Modifyed exhibit, on display until Nov. 29.

The work hangs in the new Gallery C3 at Alchemy in South End, which includes a gallery space with movable walls and open space for a variety of installations, plus a restaurant and coffee shop that’s open to the public.

Sanchez Standfield’s work began with her residency at Goodyear Arts. “I call them my giant, magnified weavings,” Sanchez Standfield said. “Sharon loved that piece, and I was looking to continue working with that series and developing it further.”

Sharon Dowell, whose work can be found all over town from Camp North End to South End, curated the Modifyed exhibit. “The show idea was taking smaller components to make a bigger whole, (featuring) artists working with non-traditional materials,” Dowell said. “Kat’s work is so eye-catching and vibrant, and to blow up the scale of mending and weaving is such a cool idea.”

Other local artists featured in the exhibit include Ivan Toth Depena and Jason Watson.

Sánchez Standfield points to her mother and grandmother as early influences. “My mother embroidered,” she said. “She would make me a new ‘bouyetta’ — that’s a traditional Panamanian dress— every time I would grow out of it, and she taught me how to crochet when I was 10.”

Her earliest work with fibers didn’t go so well. “I wanted to make my little brother a baby blanket,” she said. “I would crochet until my thumbs would hurt, but it ended up being this really long, weird scarf,” she said. “It was so much fun.”

The military is another key influence for the artist. Her father was stationed in Japan for the majority of her youth, and her mother moved them to Fayetteville to be close to friends. “They take away your identity,” she said. “You wear the uniform, have the same haircut. I grew up resenting all of that.”

In the Latino culture, in her home and immediate community, they celebrated color, texture and traditional fabrics. “I gravitated toward that,” she said.

After high school, she followed a friend to Charlotte, where she enrolled at Central Piedmont Community College. “I had never been to Charlotte or really knew much about it at all,” she said, but eventually she entered the art program at UNC Charlotte, graduating in 2019.

“In undergrad, I was very serious, and my work was always political and about the facts,” she said. “Now my work has gravitated away from focusing on what’s negative or what harm has been created, and is moreso geared toward playfulness, brightness, color and joy.”

In perhaps her largest-scale project to date, she and her fiance, John Bates — a fellow artist known as Cheeks — painted a mural for Talking Walls 2020 incorporating a visual of herself with her fibers into a collaborative mural. The mural, rich in color, covers walls in south Charlotte at The Exchange.

In it, she’s sitting on a stack of books clad in checkered sneakers, mending jeans. Paper airplanes move through the air. It’s that playfulness in art that leads her to offering interactive experiences in her work, often encouraging people to touch or rearrange the art.

“I started making things that made me happy,” she said. “I can’t help the world if I’m not in a place where I’m able to, so if I can improve myself, I can offer things to others that will help better the community.”

In the future, she plans to share her skills by offering “visible mending” workshops, sharing creative ways to refresh and repair clothing. “It highlights the fact that you’ve mended it, which is sustainable and good for the environment, but also good for your relationship with the things you have, the relationship you have caring for the things that cared for you.”

Also, Sánchez Standfield will participate in an upcoming show looking at how art is “as essential as a bag of groceries.” Open to the public on Dec. 4 at Goodyear Arts, “Nutrient Rich” will feature a “grand buffet” of more than 100 small, individual works.