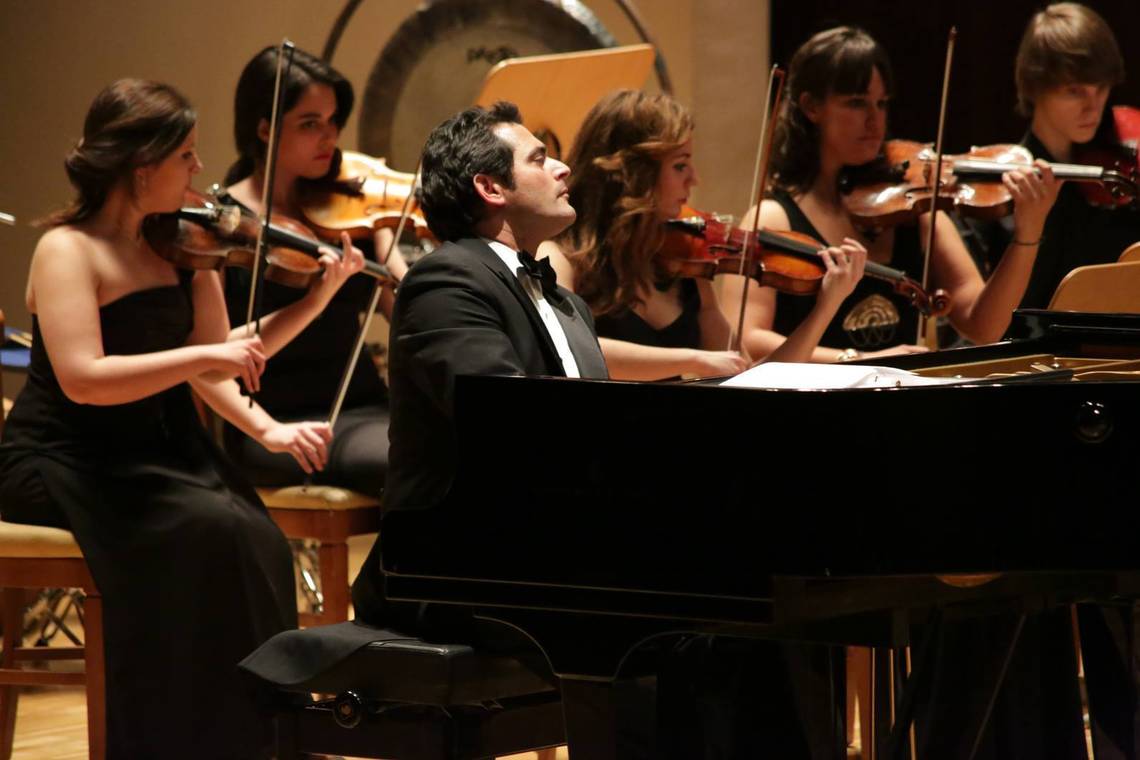 He was born in Germany and raised in Syria. The pianist and composer made his way to Charlotte on a scholarship to Queens, where he earned his bachelor’s degree in music in 1997. He has gone on to perform with orchestras across the world.

Jandali’s works blend his Middle Eastern heritage with Western styles, classical forms and harmonies. His compositions have been performed by orchestras including London’s Royal Philharmonic Orchestra, the Baltimore Symphony Orchestra and the Russian Philharmonic Orchestra, and at venues such as the Sydney Opera House, Austria’s Wiener Konzerthaus and Carnegie Hall, among others.

And his repertoire ranges from chamber music to large-scale orchestral works, including symphonies, symphonic dances, and concertos for piano, violin, viola, and cello.

Jandali also composes with a purpose: to preserve the cultural heritage of Syria.

Though he splits much of his time today between residences in New York and Atlanta, he’s made his way back to Charlotte through this partnership with Queens.

“It’s been a time to contemplate and create, rather than just wait,” Jandali said. Since the COVID-19 pandemic began, his usually busy touring season evaporated. “It’s a pivotal time to go back home.”

The two-year residency, which was announced in October, aligns with the opening of Queens’ newly renovated Sarah Belk Gambrell Center for Arts and Civic Engagement.

“This residency will allow me to share my music journey with the students and connect them with other alumni,” Jandali said. “(As opposed to the conservatory track), in a liberal arts education, you have a real hands-on experience with everything going on in the world. That was key to my own musical journey.”

“I told him that I was a composer, and we connected,” Jandali said. “(He) is keen on elevating the arts and music at Queens.”

During the residency, Jandali will compose and produce symphonic works, and will engage professional orchestras for world-premiere performances. Academically, he’ll present workshops, lectures and masterclasses on music production and composition.

The residency is funded by longtime Queens arts patrons and trustees Sam and Carolyn McMahon, who sponsored Jandali as a student along with several of his productions. “They are my American parents,” Jandali said. “I am forever grateful for them.”

While at Queens, Jandali studied under Paul Nitsch, whom Jandali now considers a close friend and mentor, and received the university’s Outstanding Musical Performer award.

“He has a gift as a composer, musician and an inspirational person, but also as a mover,” Nitsch said. “He really moves people.”

In 2013, Jandali launched the “Voice of the Free Syrian Children” world tour. His Syrian Symphony, which he recorded with the Russian Philharmonic Orchestra in Moscow, responded to the chaos that forced millions of Syrian families into exile.

“His unique focus is that the world is one place,” Nitsch said. “And that we need to make sure everyone understands that we’re all in one world together.”

In 2015, Jandali founded Pianos for Peace, a nonprofit organization that promotes peace through music and education.

“What he brings (with this residency) is a sense of hope, that people can look at him and say, ‘He started with nothing, and look at what he’s done in the world of music,’ ” Nitsch said. “That’s very inspiring.”

This story ran in The Charlotte Observer on December 29, 2020