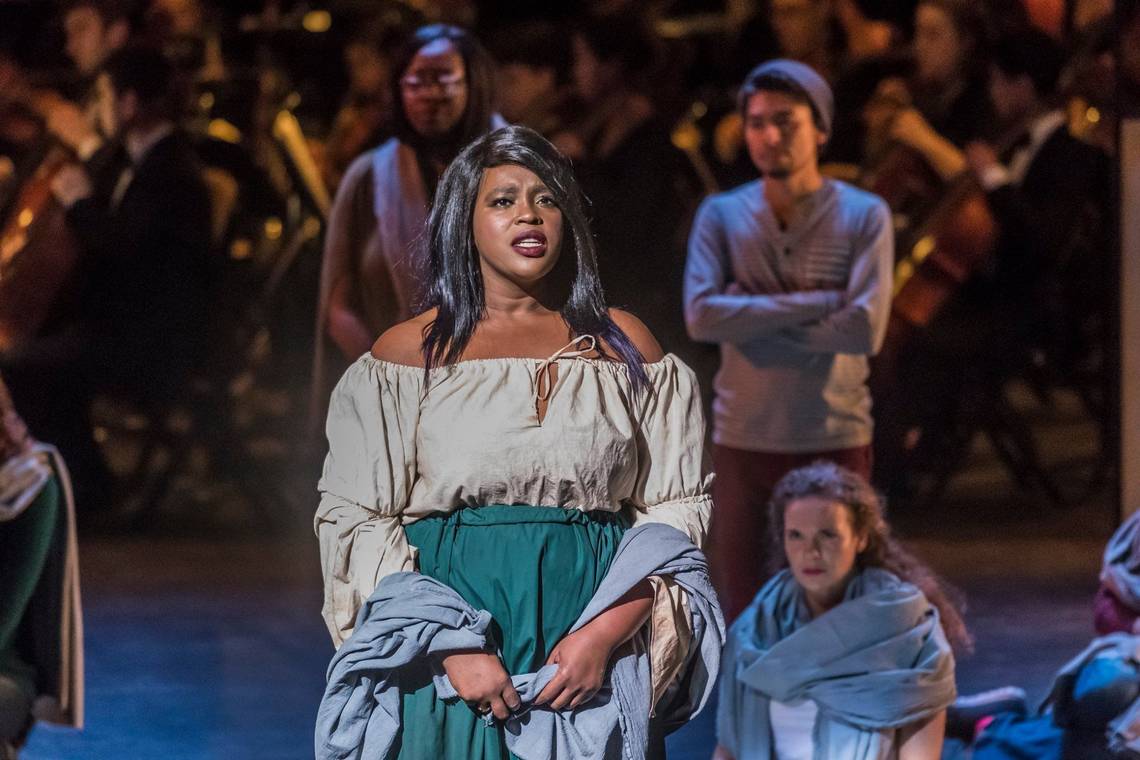 When shelter-in-place orders due to the novel coronavirus pandemic forced people to stay home, Jennifer Wiggins went to work. By day, the 28-year-old opera singer and two-season member of the Opera Carolina chorus doubles as a pharmacy technician at Harris Teeter in Stallings just outside Charlotte.

Before the pandemic, “my goal was to audition for a year-long program,” Wiggins said. “I had my arias ready to go.”

Then came COVID, casting opera singers under an unceasing fermata.

In July, she had a performance scheduled with Opera Wilmington, but it got pushed to next summer. And many companies haven’t yet released their seasons or opened auditions. So Wiggins focused on her other job.

ON THE PHARMACY FRONT LINES

Most days after work at the busy Harris Teeter pharmacy, the mezzo-soprano was too tired to sing.

“People were trying to get their refills early — sometimes up to two months — because they were concerned,” Wiggins said. “It caused an issue with the supply chain.”

Staffing was affected, too. Usually Harris Teeter staffed two pharmacists and two technicians per shift. “That way, someone could always be filling prescriptions and answering phones,” which avoided backlogs, she said. To cut back on the potential spread, the pharmacy scheduled just one of each until the end of May.

Wiggins wears a mask for sometimes up to 10 hours a day.

“The older patients can’t hear you,” she said. “I have to take down the mask so they can understand me.” Others cast nasty looks when she removes her mask to take a sip of water — a necessity for an opera singer.

Screens made things weirder. In April, Harris Teeter installed a protective plastic screen at the pharmacy. “(Customers) would tap on it, like we were in a fishbowl,” Wiggins said. “And over time, the screen would lean forward and eventually, it’d snap.”

Her music routine looks different, too. Now that her workload has eased a bit, she’s focusing on practice. Turns out, a global pandemic is a good time to perfect vocal technique.

“I practice on the way to and from work, in the shower and with random practices throughout the day,” she said. “But virtual voice lessons weren’t a thing until the pandemic.”

Wiggins takes lessons from Harold Meers, an operatic tenor with performances at the Metropolitan Opera, San Francisco Opera, Opera of Philadelphia and others under his belt. The two “meet” every couple of weeks via FaceTime — he’s in Charleston, and she’s in Charlotte in her bedroom studio.

Sometimes audio continues as video fades, or video becomes pixelated. Connection issues sometimes stop the lesson — but those are rare. Timing can be tricky.

“In person, if he has feedback, I can hear him and keep singing,” Wiggins said. “Virtually, I have to stop if he starts giving instructions because of the slight sound delay. It’s harder to have a consistent flow.”

Meer agrees, and even though he’s given online lessons for years, when he’s performing in Europe, for example, “You have to be more specific about the directions that you give because you can’t adjust on the fly,” he said. “In person is always better.”

That said, he also acknowledged that many of his students thrive online. “I have sensed a real renewal of energy and focus from Jen,” Meers said. “I find her motivation increasing.”

Wiggins has given virtual performances, too.

For Opera Carolina, she sang in a Juneteenth virtual recital, performing songs based on the texts of Harlem Renaissance poet Langston Hughes. “It’s just not the same as being live on stage,” she said. “You’re not able to stretch or change when you’re singing with a recording.”

Originally from Florence, S.C. — a fitting origin, since many believe opera started in Florence, Italy — Wiggins began studying music at an early age.

From 6th grade to freshman year at Furman University, she played viola. “My freshman year, I dropped my music major,” she said. “I wanted to be a vet.” That notion didn’t last long. By sophomore year, she picked up her music major with a new focus: voice.

Now, Wiggins has another kind of change in mind. “Opera is seen as a pretentious art form, because people aren’t exposed at a young age,” she said.

Ashley Johnson Lam, director of education and community programs with Opera Carolina, has worked with Wiggins for two years.

“Education and community programs are the front lines of the opera world,” she said. “It takes a really special kind of artist — someone who’s willing to exhaust themselves and leave it all on the stage, and then be open and welcoming to engage with people. Not every artist can do that.”

In the last two seasons, Wiggins participated in roughly 50 performances of “A Busy Bee” and “The Ugly Duckling.”

“I miss going to schools and performing,” she said. “Children are very honest with their responses, and (in those settings) I can see everyone’s face.”

For its upcoming season, Opera XPress plans to offer “Abrazo de Oso” or “Bear Hug,” a bilingual story of compassion and acceptance, recorded and shared virtually with schools with an interactive real time follow-up question-and-answer session.

“We tend to think opera is for old people,” Johnson Lam said. “Having younger people on the front lines, like Jen, is critical.”

Wiggins would like to see more people of color cast in operas, too. “It’s not about programming more Porgy and Bess,” she said. “It’s about having a Black person play a role in a Mozart opera.”

At Furman, Wiggins was one of four Black voice majors in her class, and at the University of Illinois, she was the only Black student in her two-year master’s program. “Even within the Black community, many are amazed that I’m a Black opera singer,” she said.

“People are so focused on color that they can’t listen to the story,” she said. “It helps when people keep an open mind to change.”