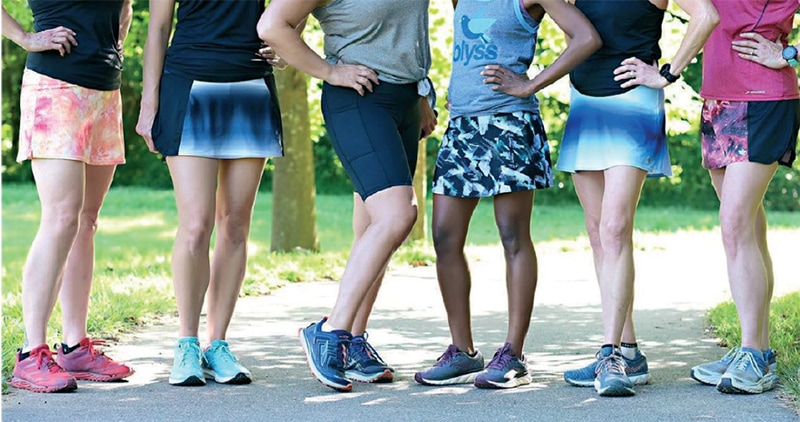 Alyson Neel was a late bloomer when it came to running. Picking up the activity at age 41, the Asheville resident immediately noticed a major issue in the apparel market: a lack of comfortable, practical running clothes for older women. Much of the apparel she saw was too hot, too short or had unrealistically small pockets. She was set to run a race in Brevard, and with summer just around the corner, she “didn’t want to wear capris.”

So Neel, 51, designed a custom pair of shorts that fit her personal needs. Soon, other runners were asking about her new threads.

She saw an opportunity to fill the gap in the apparel market and launched Blyss Running in 2015. At the annual Cooper River Bridge Run race expo in Charleston, S.C., Neel recalls her first customer, Melanie, trying on a Blyss skirt. “[She] said it was exactly what she was looking for, and when I saw her face, I was like, OK, there are other people out there.”

Five years later, Blyss is a thriving business focused on running gear for women, with online sales more than doubling in 2020.
Sports apparel generated about $181 billion in global revenue in 2019, an increase of more than $7 billion from the previous year, according to the Statistia research firm. It’s estimated to reach $208 billion in 2025.

“What I am making, there’s a need for,” says Neel, who attended the Bradley Academy for the Visual Arts in Pennsylvania and received a bachelor’s degree from the American College for the Applied Arts. “I’m designing for the customer like me: They’re not elite athletes, and it’s not something their daughters would wear.”

Blyss designs have longer inseams — 5 inches or 8 inches, compared to a more common 3 inches — and are made, in part, with elastic intended to prevent ride-up or chafing. Many of its products, which include skirts, skorts, capris, tights, crops and shorts, are made with an antimicrobial fabric, which wicks away moisture and provides UPF sun protection. They also have multiple pockets, including one large enough to hold a phone.

“For me it was about safety,” she says. “I was trail running, and I would go out alone, so I needed my phone in case I fell or my kids’ school needed to be in touch with me.”

To get Blyss off the ground, Neel teamed up with Mountain BizWorks, an Asheville-based nonprofit that offers entrepreneurship classes and loans. “Not only did I go through their program, but they were there [throughout] with coaching,” she says. “I took more classes as I progressed as a business.”

A major challenge was finding a manufacturer to produce her gear. “At the start, I got a lot of nos,” she says. “Nobody wanted to take on my project because of the complexity of what I was designing. They didn’t think they’d be able to manufacture for the price I wanted to sell it for.”

Today, Blyss clothes retail from $15 to $100 and are made in a small factory near Lancaster, Pa.

Though Blyss sells shorts and tights, Neel says, “Women love running skirts, because they provide coverage over a tight short, and it makes them feel good; they’re cute.”

Skirt designs have gotten more colorful over the years — “I’m a very black and gray person,” Neel says — and some aspects of the aesthetics are also practical. “In the running trail community, a number of customers asked me for blaze-orange items because of the hunting season.” They needed to be visible while running in the woods.

Rebounding from the COVID-19 crisis

The COVID-19 pandemic canceled in-person events, which made up half of Neel’s revenue. “The beginning of [2020] was quite stressful,” she says. “I never thought I would make up that difference.”

She already had a well-functioning website and was set up to sell online. “People were turning to running in droves because they wanted to be outside,” she says. So she invested more in digital marketing and her online presence.

Planning also helped. She had ordered her materials for the year early on, so she didn’t experience supply-chain issues that crippled some businesses.

Helping others also played a key role, Neel believes. “I held fundraisers and donated fabrics to my factory for making [personal protective equipment], and I think my customers wanted to support that,” she says. The donated mesh used to line the pockets of her shorts was repurposed to outfit the interior of masks, which helps with breathability.

After five years in business, Neel is committed to sustainability. “My goal is to have everything using recycled materials in 2022.”

Helping others reach their goals is what she likes best about her job. “That’s the joy in doing this,” she says. “If you’re feeling comfortable, you’re more likely to follow through.”

Mostly, she credits her community. “If I weren’t in the Asheville community, I don’t know if I would have done this,” she says. “There’s so much support, and the running community is huge.”