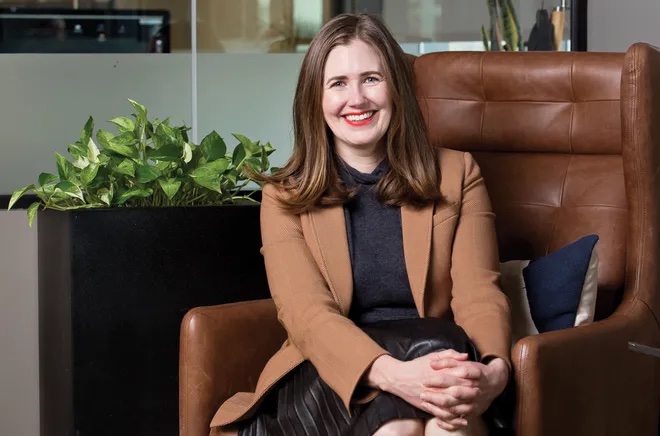 Regan Walsh on becoming a life coach, setting boundaries with work and why women don’t get promoted.

Regan Walsh once quit a job after four days. Assigned to a women’s haircare client at a Columbus-based digital advertising agency, she felt uninspired and stifled. During those few days, something spoke to her—and it wasn’t the shampoo. It was her intuition.

“I knew there was something bigger for me in my life,” she says. “I’m not going to use social media to engage with shampoos and conditioners, that’s not my style. I wanted to go big on something that would have an impact for the community.”

She left the company, owning her new nickname, “One-Week Walsh,” and walked into a dirty warehouse, counting parts in shipping and receiving for her family’s business. Dirty hands were better than marketing clean hair.

Soon after, she found a new job—a higher calling—at the gritty startup nonprofit Flying Horse Farms, which provides free camp experiences to children with serious illnesses. “When you have the courage to listen to your gut,” Walsh says, “you’re betting on your own dream, not other people’s dreams for you.”

Trusting the journey, even when the path is unclear, is one of Walsh’s assets. Varied jobs across industries may not all have made sense at the time, but they equipped her with the knowledge and expertise she brings to her career today as a life and executive coach.

The owner of Regan Walsh LLC, she is a regular keynote speaker and seminar leader. She’s spoken to companies from Nike to Nationwide Insurance, QuickBooks to Scotts Miracle-Gro, for audiences ranging from 50 to 500.

A contributor to Forbes and Harvard Business Review, her new book, Heart Boss, has earned praise from New York Times bestseller Amy Jo Martin, host of the “Why Not Now?” podcast, among others.

The book is a memoir and self-help guide helping others discover what matters most, something Walsh has done, in one form or another, her whole life.

In the summer of 2019, Megan Shroy was exhausted. The founder and president of Worthington-based Approach Marketing had dedicated years to her business, often at the expense of other areas of her life, like family and health.Your stories live here.Fuel your hometown passion and plug into the stories that define it.

“As this business grew—and we grew fast—I struggled with finding time for prioritizing my personal life—my kids and my husband,” Shroy says. “ I wanted to be more intentional about doing that.”

Having shared a mentor with Walsh at Ohio University, the two had stayed in touch and Shroy invited Walsh to speak to her employees for an afternoon professional development session on finding balance.

“It was super impressive,” Shroy says. “I thought, I need to practice what I’m preaching. I’m not the epitome of work-balance.”

She had been buried by what Walsh calls “the invisible load,” something Walsh says affects women more than men: Packing lunches, managing kids’ sports schedules—all of the things women, most often, absorb in addition to work and family commitments.

“It didn’t matter how much help I had, I still couldn’t keep up,” Shroy says. “I was running, and I was still behind.”

She hired Walsh for a one-on-one coaching session. For three months, she met with Walsh biweekly for virtual sessions on balance, priorities, and taking out what Walsh calls “head trash”—self-doubt and “shoulds.”

By centering on the eight elements of the “life wheel”—family, social life, career, financial stability, health, mind, time, personality—“She really helped me identify where I wanted to focus,” Shroy says. “But she also gave me accountability and practical steps on how to achieve that.”

One simple fix came when she began using her work calendar for personal priorities. “That’s how I run my workday,” Shroy says. “I could schedule a walk in the middle of the day with my husband, or pick up my daughter from school, because I wasn’t going to book over it. It sounds so simple, but it helped me so much.”

“What you are not changing, you’re choosing”

Shroy is one of many clients, mostly women, whom Walsh has helped to find balance and reconnect with their passions. “Understanding clients from that holistic perspective helps to understand the big picture of what matters to them and why,” Walsh says.

One part therapist, Walsh encounters a few consistent barriers to success and balance that are specific to women: perfectionism and what she calls “the disease to please.”

“These are the women who not only know they will do things right, but they say yes to everything because they don’t want to disappoint anyone,” she says.

She shared an example of a successful head of purchasing for a major grocer. “She was about to leave a job of 20 years to move her family, sell a house, find new schools—and she was stressed about Easter baskets,” Walsh says.

“She has a stay-at-home husband,” Walsh says. “I asked her, could you not empower your husband to take care of the Easter baskets?”

Another client, who was working 60-70 hours a week, admitted to staying up late, eyeing Pinterest for the perfect cupcakes to bake for her child’s classroom. “I told her, the kids don’t care if your cupcakes look like spiders or if you just give them a HoHo,” Walsh says.

Asking for help is a key component of Walsh’s strategy for women. She suggests easy fixes, like streamlining the daily wardrobe to reduce decision fatigue, and getting childcare or cleaning services when feeling overloaded. “We have all the tools, but if we just ask for help, we could get so much more done,” Walsh says.

She notes that many women, afraid to share their successes or ask for what they want, get passed over for opportunities. “You have to raise your hand and ask for what you want,” she says. “Be confident in sharing your wins. It’s not arrogant to celebrate your wins.”

Many of Walsh’s clients feel disconnected from their lives or have lost their passions, she says. For those women, she teaches the importance of personal disruption. “You start to lose your sizzle and that excitement,” she says. “You constantly need to disrupt yourself.”

For a stay-at-home mom, disruption might be serving on a board, volunteering at the school district or taking a class. “Once you understand your focus areas, it’s about going big on those things,” Walsh says.

Most importantly, “What you are not changing, you’re choosing. There is power in choice. You have to own your authority and your power to choose.”

Walsh recently shared some of these tips, virtually, with a roomful of women at the law firm Vorys Sater Seymour and Pease.

Not long after the session, Schmidt received a text from an attorney: “The biggest takeaway was that I have power over my own time, so I’m not checking my email in the morning,” the text read. “I’m owning my day, and I have Regan to thank for that.”

During the session, Schmidt says Walsh’s energy was palpable. “It’s just infused in everything she does—in her body language, the tone of her voice, the speed and excitement. Her hands are moving, she’s emotive and it really captures you,” Schmidt says. “You can tell she’s passionate about what she’s sharing.”

The youngest of six children, Walsh grew up in Worthington in a conservative Roman Catholic family. From an early age, she grappled with learning differences. Tested and observed for dyslexia, though never formally diagnosed, she struggled in school.

“Things that were easy for my peers and siblings were hard for me,” Walsh says. “My teachers always said that I worked too hard for the grades I earned.”

Rather than test scores, Walsh focused on people. “As a young kid, I was always raising my hand for student council and running for class office, because I knew I would never get the highest grades, and I wasn’t the best athlete,” she says. “My innate gift is to know people and to be able to connect with people.”

During her senior year, a new girl started at Walsh’s high school. “She was from the South, transitioning into this upper-middle-class suburb in Ohio. I thought, she doesn’t know anybody,” she says.

Compassion kicked in, and Walsh invited the new girl to sit with her for lunch. “We didn’t become best friends, but I helped her make that network. I’ve always been one to get people in the right hands.”

At Ohio University, she chose a fitting major—interpersonal communication—and engaged in campus leadership. As a sophomore, she served as president of her sorority, a post usually held by an upperclasswoman.

Her first job after college was for a New York City-based agency, creating live events for companies like Lucent Technologies and AT&T, before the dot com bust. “I was really lucky to land that gig, and it allowed me to work under an incredibly nurturing woman,” Walsh says.

That woman was Colleen Mohan, who today serves as a senior vice president of brand marketing for a major media company. Walsh had been set up with Mohan through an Ohio University program that paired students with companies.

“I remember in that conversation being simply charmed,” Mohan says. “Regan was everything that you would want in a young employee—enthusiastic, authentically curious, not rehearsed at all.”

Even though Mohan thought the interview was informational, she gave Walsh a job.

Once Walsh’s boss, Mohan now calls Walsh a friend and mentor. She’s not surprised at Walsh’s successful coaching business. “She’s not afraid of the truth. She will tell you exactly what she thinks,” Mohan says. “But she puts it back on you to make decisions. You can’t hide from her.”

A common theme throughout Walsh’s life was helping friends, family or colleagues find clarity in transition. “I started noticing compliments. I make people feel really good, feel heard, help them solve problems,” she says. “I started to notice that as one of my core strengths.”

Ultimately, corporate America wasn’t a good fit. After 9/11, Walsh got laid off, but she landed at a pharmaceutical company. “It certainly wasn’t my highest calling, when you’re 24 years old and you have a rent check to pay,” Walsh says. “You do what you have to do.”

When she moved home to Columbus, she got a job with Ologie, a branding and marketing agency, working on creative branding for companies like Capital University and Cardinal Health.

And after the one-week job marketing hair care products, she began working at the children’s camp. “I got to build the brand from the ground up and use all of the skills I had gained from every career chapter,” she says.

A seminar led by Columbus-based life coach Chasity Kuttrus proved a pivotal moment. “I recognized how in love I was with human development and being someone’s ally,” she says. “And I had always dreamt of running my own business.”

She was 38 when she decided her calling was to become a life coach. At the time, another coach told her that she wouldn’t be taken seriously until she was 40. “I had worked for a family business, a startup, a coaching company, and I had seen a lot. At that moment, I felt doubt, but I was able to recognize that my experience would get me where I was trying to go.

“If you’re passionate about your path, you know you’re on the right track,” Walsh says. “It’s gut instinct. You have to be strong enough to follow your gut and put one foot in front of the other. My instincts have never steered me wrong.”

The original story appeared in the April 2021 issue of Columbus CEO.