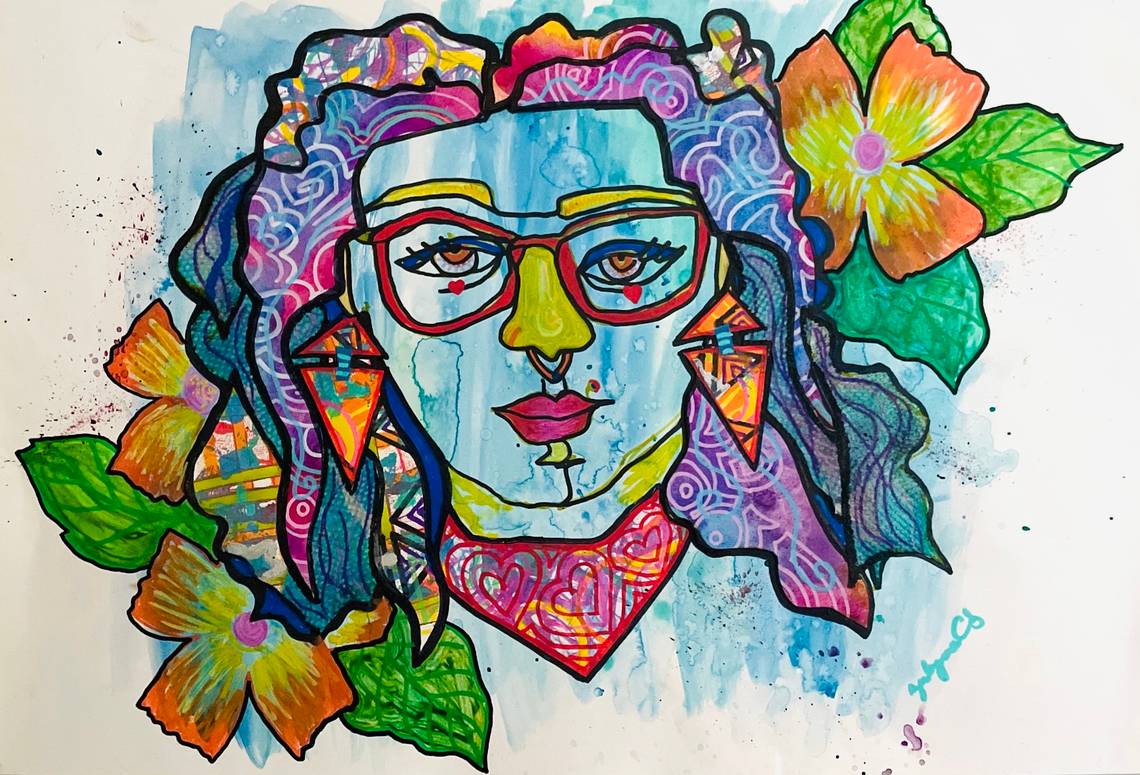 On a Tuesday in late March, artist Zuleyma Castrejon was preparing for a big move. She is one of the original members of the OBRA Collective — until now, a floating group of Latinx and immigrant artists which offers membership-based studios for artists. And now, like other artists in the group, Castrejon was ready to shift her artwork and supplies into her studio space in the collective’s new uptown location.

Located in the recently opened VAPA Center, the center gives the collective its first permanent gallery and studio space since its founding in 2013. The center serves as a hub for a diverse group of visual and performing artists on North Tryon Street.

The space also comes at a time when the collective has officially become a nonprofit. The group has about 40 members, including 15 to 20 who are currently active in the organization. On its website, the collective tied OBRA to “Observe, Bridge, Respond, Art.

“We are a group of Latinx, immigrant, undocumented and ally artists. We create immigrant and Latinx affirming art in order to raise awareness and to celebrate our community.” In Spanish, the word obra means “to work” or “to act.”

Through exhibitions, workshops, artist support, events, and murals, the collective creates a safe space and opportunities for immigrant and Latinx voices through visual art, film, writing and music. “I’m very excited to see how far we’ve come,” Castrejon said. “For me, it’s always been about making connections with other artists that are similar to me, and being able to create in a space where I can be who I am and talk about issues that are important to me.”

Castrejon’s art includes printmaking, drawing, mixed media work, resin jewelry, which is something she started during the pandemic. The judgment-free nature of OBRA’s members is key: “They’re all immigrants or have some sense of what the immigrant experience is,” she said.

FROM MEXICO TO CHARLOTTE

Castrejon is originally from the Mexican state of Guerrero, but she moved to the Charlotte region just before her third birthday. “We weren’t very well off in Mexico, so my mom decided to move here so that we could be together, and so I could get a better education,” Castrejon, 28, said. “She didn’t want us to grow up separated.” After attending Central Academy of Technology & Arts in Monroe, Castrejon went on to earn an art degree at Johnson C. Smith University.

Today, she teaches art at the KIPP Academy, a public charter school in Charlotte. She also has participated in live painting events at the Mint Museum, and her work has been displayed at the McColl Center for a family day and as part of a photography exhibit at The Light Factory, which is also at VAPA.

These and other themes related to the immigrant experience are tackled by OBRA artists in their work. Artist Brenda Khan, a graduate of Myers Park High School and UNC Charlotte, joined the collective in 2017. Originally from Mexico, Khan’s family moved from California to Charlotte in 1992. Her uncle had moved to North Carolina and relayed stories of a lush landscape and relative affordability.

Today Khan is a citizen, but while studying at UNCC, she was an undocumented international student. That came with some challenges and setbacks, she said, “like being able to go to grad school or travel outside of the country.”

Art has always been a way for Khan to cope and express herself. “I came up with a saying, ‘Encuentra cura para tu locura,’ ” she said. “In English, it means, ‘Find a cure for your craziness or craze,’ and I think that’s what art has helped me with.” With the OBRA Collective, Khan also found community. “We are really pushing to get the next art out there… and to help other fellow artists get exposure and learn from each other,” she said. “It really does feel like a group of people that you can count on.”

Before the pandemic, the collective hosted “Resist,” an activist art show at C3 Lab. “We had artists who made pieces on feminism, immigration, poverty — all kinds of activist themes of resistance,” Castrejon said. “That’s always going to be something that’s important to us, but it’s not what we focus on all the time.” They also focus on the rich and diverse nature of immigrants in Charlotte. In 2020, a few members created “Tapestry,” a wrapped mural originally installed at the corner of Idlewild and Monroe roads, which illustrated Charlotte’s east-side diversity. The mural suffered damage, but its original sketches are on display at the new studio.

Studio artists at the new VAPA space also get a solo show, something hard to come by, according to Castrejon. “A lot of times (Latino artists in Charlotte) apply for spaces to show their work and don’t get selected,” she said. “We’re excited to be able to do that to provide a space where artists can go see and even find out information about joining the collective.”

They also plan to host community workshops in Spanish. “I meet a lot of people who are talented, older people who ask about joining collectives or taking workshops, but everything’s offered in English,” Castrejon said. “I will continue to make art about immigrants and their struggles, because I want people to know that. But I don’t think that I need to focus all the time on all of these struggles, because I want people to also celebrate the working-class immigrant,” she said.

“But this is also my culture, and I want to share a bit of it with you. In getting to know each other, we can work through so many differences.”

To learn more about the OBRA Collective, visit VAPA between 12-8 p.m. for free, open-studio Saturdays, the first Saturday of each month. You can also visit the website at obracollective.wordpress.com

The original version of this story ran in the Charlotte Observer on April 22, 2022.