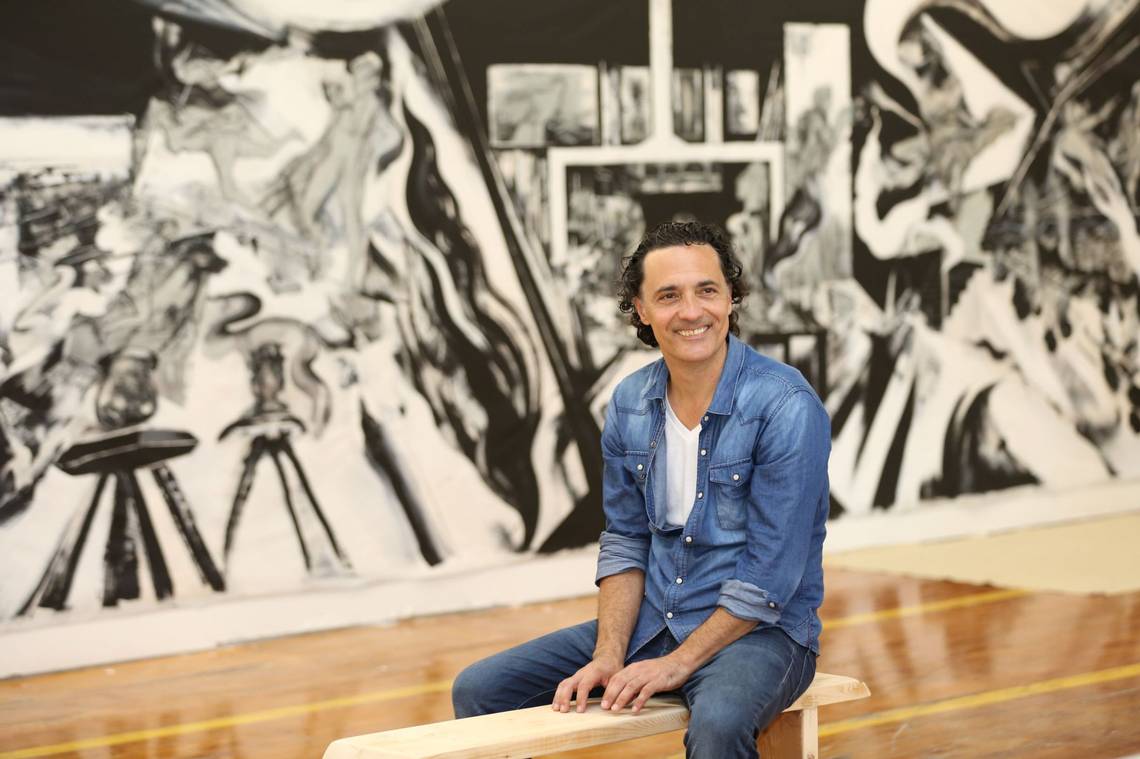 As a child, Leandro Manzo never considered what he wanted to be when he grew up. When it came to being an artist, it just seemed he always would be one.

Born in Rio Gallegos, Santa Cruz, Argentina, Manzo first displayed his work in an exhibition at the Museo de Artes Visuales de Quilmes when he was just 13 years old.

As an up-and-coming artist, he took on various jobs — painting walls, illustrating for publications, café work and a brief stint in construction — but always continued his art.

To date, Manzo has displayed work in over 25 solo exhibitions across his home country and elsewhere around the world, from Buenos Aires and Sao Paulo to Amsterdam, Los Angeles, London and Paris. His painting and drawings are also displayed in nearly 50 group exhibitions.

Now in the Charlotte area, the artist, 51, isn’t slowing down.

On the Friday before Thanksgiving, he married his longtime girlfriend, Cecilia Moriondo — who helps him translate — in a small ceremony on Lake Wylie. Two days later, he hosted the opening reception for “Leandro Manzo: Origen,” his latest exhibition, which showcases over 100 works displayed in a renovated textile mill in Mooresville.

The culmination of a decade of work is now exhibited at his new 17,000-square-foot studio and gallery space at Merino Mill, which dates to 1893. The sprawling mill space covers over 1 million square feet, and also houses Hitachi, Greenworks Tools, Mohawk flooring, Main St. Antiques & Design Gallery and Alino Pizzeria.

The space is so large that owner Michal Bay uses a fire-red Giorgio Armani edition Vespa to whiz from room to room.

Inside, exposed brick, vaulted ceilings and original, refinished wood floors reflect ample natural light. Without the worry of finding gallery space, Manzo is free to focus on his art. “The space gives me all the freedom I need,” he said. “It’s not possible to do this anywhere else.”

“Three thousand people worked here making towels,” said Bay, a close friend of Manzo’s and patron of his art. The two met five years ago through mutual friends over pizza at Alino.

Bay has supported Manzo’s art ever since, including providing work space and, now, exhibition space. “This guy is very generous, and he loves the art,” Manzo said. “I never dreamed of anything like this.”

Included in the exhibition is “Requiem in Black and White,” paintings Manzo uses to examine the origin of life and where it goes. The backbone of his work, he began the series in 2004 with paper and ink. Eventually, the series grew to huge canvases that share other philosophical messages.

“These works are where I live and dream,” Manzo has said. “They’re where I recognize my greatness, my misery, my contradictions, my successes and my mistakes.“

In an 11-by 6-foot work, Manzo manipulates black and white colors to explore the contrast of a storm, its inner calm and outside influence. “The storm is outside, but inside, complete serenity,” Manzo said.

He created his “Pacific to the Atlantic” watercolor series — popping with bright blues, yellows and reds — while sailing from the Atlantic to the Pacific oceans.

The landscape and natural colors inspired him, Moriondo said. Smaller than his other series in scope, she said, “We were living on the boat, and the only thing he could do was paint on a small-sized canvas.”

Works from “Taming The Bull,” a colorful screen-print series, place the bull as a metaphor for what we might need to subdue in our lives.

“When people see his work, he wants to transmit what they have never seen before,” Moriondo translated for Manzo. “He wants his work to be something very fresh and new, and leave something good in your heart, a good energy.”