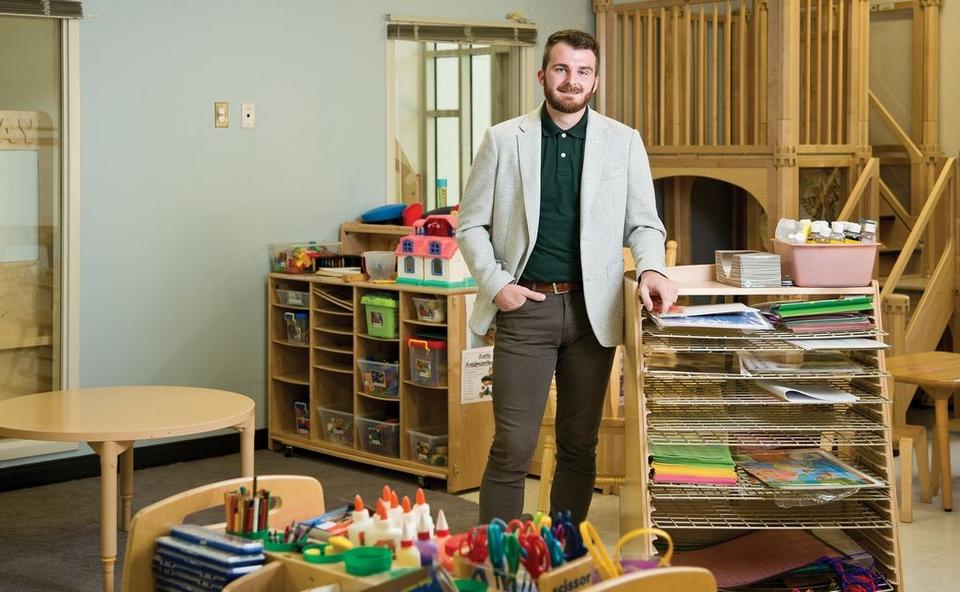 Amid the pandemic, South Side Early Learning is innovating

Colin McGinnis knows that, for preschoolers, stability is key. At South Side Early Learning, the “littles,” as the 26-year-old CEO calls them, interact with the same friends and teachers daily. They share meals and visit the same rooms. The comfort is in the routine.

Then came Covid-19, with a whirlwind of uncertainty, fear and constantly changing rules.

From March 22 to May 31, South Side had to do something never before done in the center’s 98-year history: It canceled in-person programming—a huge blow to some of Columbus’ most vulnerable families. “This was disruption on top of disruption,” McGinnis says. “It took away the stability we were providing day in and day out.”

Last school year, 90 percent of children enrolled at South Side were from families below 200 percent of the federal poverty guideline. These families rely on the center not only for daily child care, but for meals and other necessities.

In-person programming was impossible, but McGinnis didn’t furlough or reduce staff. Instead, he got to work. Staff set up Google Meet classrooms, recorded videos for families to watch from home and generated more online content. With his signature sunshiny outlook, McGinnis encouraged innovation.

Cue the CareKit, a package containing necessities from soap, diapers, wipes and nonperishable food to educational materials. “We needed to be there for our families,” McGinnis says. “In kit format, weekly, our families could come and get the care they needed.” In just over two months, they distributed over 600 kits.

On June 1, when South Side reopened to families, not everyone could return. “We gave priority to families that were working,” McGinnis says. “We had to accept that we weren’t going to please everyone.”

Capacity was cut by 40 percent. Partitions and barriers went up, and a new configuration took form. Prior to the pandemic, the space could accommodate 18 children and three teachers per classroom, but given the physical restrictions due to concerns about the virus’ spread, that ratio was reduced to nine children and one teacher per room—and even fewer for the infants and toddlers.

Providing preschoolers stability takes a lot of support. “The pandemic pointed out how critical early learning is for families, children, the economy,” says Shiloh Todorov, South Side’s board president. “We need to think about how we invest in this critical sector and help this industry bloom instead of barely survive.”

“Early learning staffs are made up largely of women of color being paid abysmal wages,” he says. “We need to innovate, think differently and be vocal in the advocacy space.” Though a self-described “natural observer,” McGinnis is undoubtedly taking action.

Before the pandemic, South Side had begun work on Project NUDL (pronounced “noodle”), a social enterprise created to provide early learning professional training and share best practices for centers. “I knew [the pandemic] was an opportunity for South Side to be a leader, and the model that I know we are,” he says.

Partnering with Future Ready Columbus, South Side designed a free, interactive guide to share tips and information with industry peers, so they too could safely reopen their center-based child care programs.

“The landscape was changing quickly, and the playbook offered practical, grounded counsel,” says Jane Leach, executive director of Future Ready Columbus. “We felt that it was an authentically generated document, so we offered to support the e-distribution.” To date, the playbook has been downloaded over 350 times.

For now, McGinnis will move the needle from his home office, along with the rest of his administrative staff. “But I’m finding time to go in, because I miss it,” he says. “It’s the reason I took the job—the interaction with the work.”