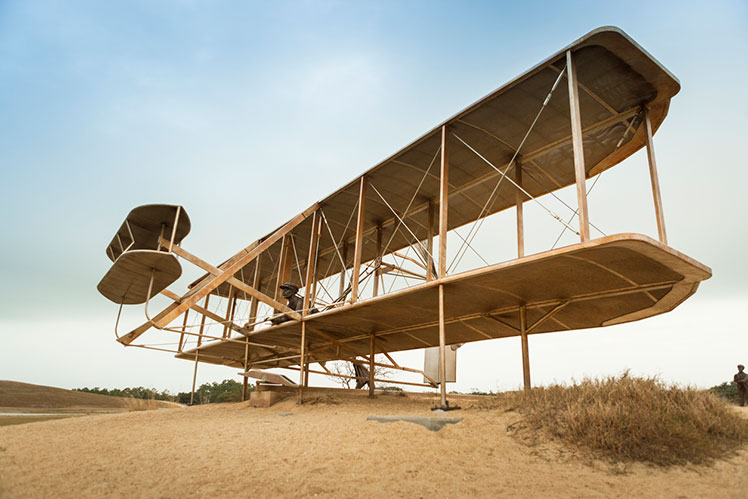 One of the great things about traveling is discovering the unique things about each destination. North Carolina is no exception. From historic landmarks to natural lures — and lots in between — here are 10 things you can only experience in North Carolina.

Sure, the Wright brothers were born in Dayton, Ohio, making for an ongoing first-in-flight battle between the two states. However, the fact remains: In 1903, Orville and Wilbur lifted their first glider off the ground from the dunes of North Carolina. The small town of Kitty Hawk, along the Outer Banks, provided the brothers’ much-needed combination of steady wind and soft-sand landing. Today, you can visit the Wright Brothers National Memorial, dedicated to the site where it all went down — or up. But don’t stop there: Call on Kitty Hawk Kites for your chance to fly a glider just like the ones Orville and Wilbur would’ve launched.

Her iconic diagonal-black stripes still shine, after a 2,900-foot move and hundreds of years of hard work. Protecting one of the most hazardous sections of the Atlantic Coast, where the current forces are so strong, many shipwrecks have given it the reputation as the “Graveyard of the Atlantic,” the Hatteras lighthouse is a must-see for any native North Carolinian or visitor to the Old North State.

Each fall, on the third weekend of October, the mountain town of Banner Elk is all abuzz about one furry creature: the woolly worm. For 40 years, the Woolly Worm Festival has celebrated the caterpillars’ weather-predicting abilities, and has brought families and friends from across the region together to share in the fun. The festival is packed with over 150 food and craft vendors who sell just about everything — alpaca socks, local art, jewelry, soaps and more. Fair-food favorites include turkey legs and kettle corn. And don’t miss your chance to enter into one of many woolly worm races.

4. Unto these Hills | Cherokee

One of the longest running outdoor dramas in the U.S., Unto These Hills tells the tragic, triumphant story of the Cherokee people, beginning with the years prior to the Trail of Tears and ending with the present-day fortitude of the people. Other worthy North Carolina outdoor dramas include Horn in the West in Boone, Manteo’s The Lost Colony, and From This Day Forward in Valdese.

Climbing, kayaking, hiking, zip-lining, live music concerts, and of course, whitewater rafting are all highlights at this one-of-a-kind outdoor facility just outside of Charlotte. From morning to night, the Whitewater Center offers over 30 different recreational activities. Don’t miss a taste of some local brews and fried pickles at the popular River’s Edge restaurant as you watch others brave the rapids.

The palatial country home of Edith and George Vanderbilt, grandson of famed industrialist Cornelius Vanderbilt, is one of the most visited destinations in the state. Packed with history, architectural intrigue, and Gilded Age opulence, the 250-room residence, which includes an indoor pool and bowling alley, also features 8,000-acre surrounding grounds, and meticulously manicured gardens. The annual Christmas at Biltmore event welcomes over 400,000 visitors alone, with its signature 35-foot Fraser fir tree adorning the dining hall. And while winter presents a wonderland, don’t sleep on spring. Biltmore Blooms event is another ideal time to witness the rainbow of colors that cover the estate grounds.

Gear up for a slip-sliding adventure as you whizz down a 60-foot natural mountain water slide into an 8-foot-deep pool at Sliding Rock. Not up for a dip? Watch the kids from one of two observation platforms that overlook the fun. The attraction is accessible year round, weather permitting, but only staffed with lifeguards and open restrooms from Memorial Day to Labor Day. Nearby Looking Glass Falls makes for a great pit stop beforehand, or pack a picnic and grab a table at Pink Beds.

Prepare to be wowed at the Duke Lemur Center in Durham. Founded in 1966, the Lemur Center is an acclaimed non-invasive research facility aimed at protecting and preserving the most endangered mammals on earth. The stunning black-and-white ruffed lemur, a critically endangered species in its native Madagascar, is just one of 14 species of over 200 lemurs housed at the site. Book a tour and learn all about these wonderful creatures.

Though the California Gold Rush is more celebrated in history, gold was first found in an unassuming area of North Carolina, just east of Charlotte. Until 1848, in fact, North Carolina led the country in gold production. Today, Reed Gold Mine honors the site of the first documented gold found in the U.S. Grab a pan and look for gold yourself or marvel on a tour of the underground mine.

Revel in the wonder of a wild-pony sighting along North Carolina’s famed Outer Banks. These feral Colonial Spanish mustangs, which have roamed freely in the area for roughly 500 years, surface at each end of the barrier-island chain, from Corolla in the north, where the Corolla Wild Horse Fund manages and protects the horses (and hosts children’s programs and a museum and shop), to Shackleford Banks in the south. On the sound side of the Cape Hatteras National Seashore, you’ll find a smaller herd, which calls Ocracoke Island home.